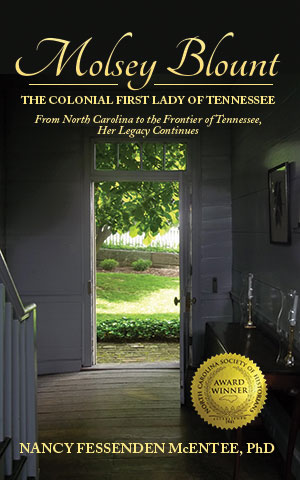 Formatting of a new revised print edition for CreateSpace and cover design, 2018. The final Word version of the book was converted to ePub using Sigil, then to Kindle format with Kindle Previewer, which includes the latest version of Kindlegen.

As always, preparing the images took more time than other tasks. Photos and illustrations were optimized for print in Photoshop to resize and/or crop, sharpen, add grayscale filters, increase dynamic range, repair scratches, and reduce noise, as needed.

The cover image was taken by the author. It depicts the dark entrance area of the Blount mansion with spring lawn and foliage visible through the open door. It’s almost a metaphor for the story of Molsey Blount, The Colonial First Lady of Tennessee, which is largely clouded by loneliness and great personal loss, and brightened by resourcefulness and perseverance. Based on extensive research, this detailed history of Molsey Blount is an insightful look into the life of a politician’s wife and the role of women in the eighteenth century.

The KF8 version of the Kindle eBook duplicates most of the print edition’s formatting for chapter headings, images, captions, quotations, bibliography, and the short index, which was manually reproduced using Sigil’s method of inserting index markers and linking. Unfortunately, Amazon’s “look inside the book” feature replaces all of the KF8 formatting, which we’re encouraged to use, for the primitive lowest-common-denominator HTML of the oldest Mobi7 Kindles and Cloud Reader.

Many authors have complained about the ugly transformation of their meticulously-formatted books in the “look inside” preview or Cloud Reader.  Amazon’s latest downloadable Kindle Previewer with Kindlegen supports advanced formatting available in the latest KF8 tablets and dedicated eInk Readers. It has dropped previews for the older Mobi7 devices, including the quirky Kindle DX, which has hung around long after it should have crossed the Rainbow Bridge. That would be fine with me, except that “Look Inside the Book” and Cloud Reader render Kindle books very publicly using obsolete formatting, which is barely a notch above plain text.

The downloaded Kindle files will display advanced formatting (if present) properly on KF8 devices and high-resolution eInk readers for Kindle users who take the leap and purchase books in spite of their disappointing appearance. It’s easy to argue that Amazon has to present “Look Inside” titles with only the most basic formatting so that users without access to KF8 devices won’t be terribly disappointed, but it would be more interesting for readers if “Look Inside” previews showed books in their best light.